The rest of the keyglove hardware has arrived! Awesome! 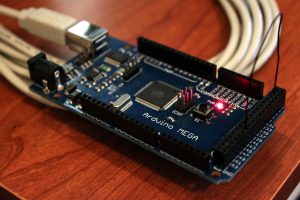 In case you have no idea what I’m talking about, my previous posts about the keyglove are here, here, and here.

After I got the envelope open, I plugged the Arduino board in and, surpassing all expectations, had my prototype code running on it in about 10 seconds. It was literally that fast and easy. My code didn’t do much at the time and has required some changes, of course, but the interface couldn’t have been easier. I am very impressed with the board and the simple, effective development environment. 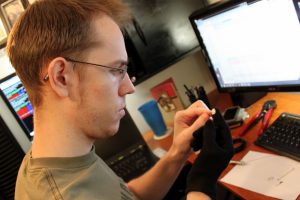 Most importantly, the silver epoxy showed up, and I’ve been able to test it on the glove’s fingertips. It is remarkably conductive, and in that sense it is exactly what I was hoping for. However, it is a pain to work with because of the nature of epoxy, and it is relatively expensive. I only did two of the contact pads, and it’s reasonable to believe that I could have used the rest of the tube on just that one glove. Silver is over $21/oz right now, and combined with the extra properties and manufacturing costs of the epoxy, that adds a good $30 to the materials cost of any single glove, not to mention a lot more work. 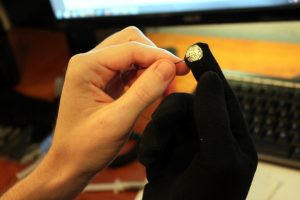 So, I’m going to try using adhesive copper foil tape instead (maybe with some regular epoxy to make sure it stays put). I don’t have any of it yet, but hopefully it will arrive in the next couple of days. In the mean time, I can work on my code and get it much closer to completion. I don’t think I’ll be able to get it to a true working state until after the PS/2 cable shows up and I can test the actual computer interface a bit. How that works will impact how I define the keycode constants. I want this thing to be customizable; the Arduino has 512 bytes of EEPROM memory which I should be able to use for persistent customization just such as this.

This is so awesome! 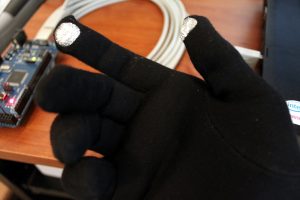 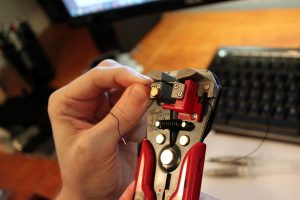