The first of the keyglove prototype hardware I ordered has arrived! So far, it’s just the gloves and wire and a few tools; I still need the silver epoxy and Arduino board. I got two pairs of gloves in case I screwed one up, since they were so cheap. I’m wearing them right now (and will try to continue to do so until/unless they become annoying). I want to see how easy it is for me to do regular daily tasks while wearing them. 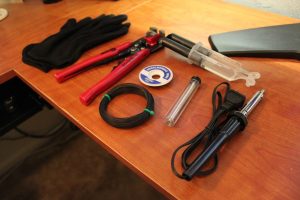 Of course, there are a few reasons this “test run” isn’t quite realistic. First, I’m wearing two gloves right now, and for real usage, I’d really only be wearing one. Second, these gloves don’t have any hardware on the back or, more importantly, conductive pads on the front anywhere. Certain things that make strong use of the fingertips (such as typing) won’t feel accurate yet. But even so, it’s an interesting experiment. The hardware should add a negligible amount of weight, and the conductive pads should hopefully be thin enough not to be very disruptive.

Most of what I do during the day for work is typing or moving the mouse. Here are my observations so far: 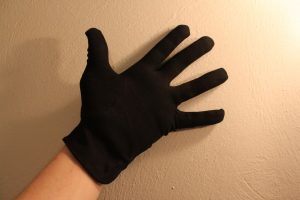 More to come later. I need to see if I can finish the Arduino code.

[…] In case you have no idea what I’m talking about, my previous posts about the keyglove are here, here, and here. […]