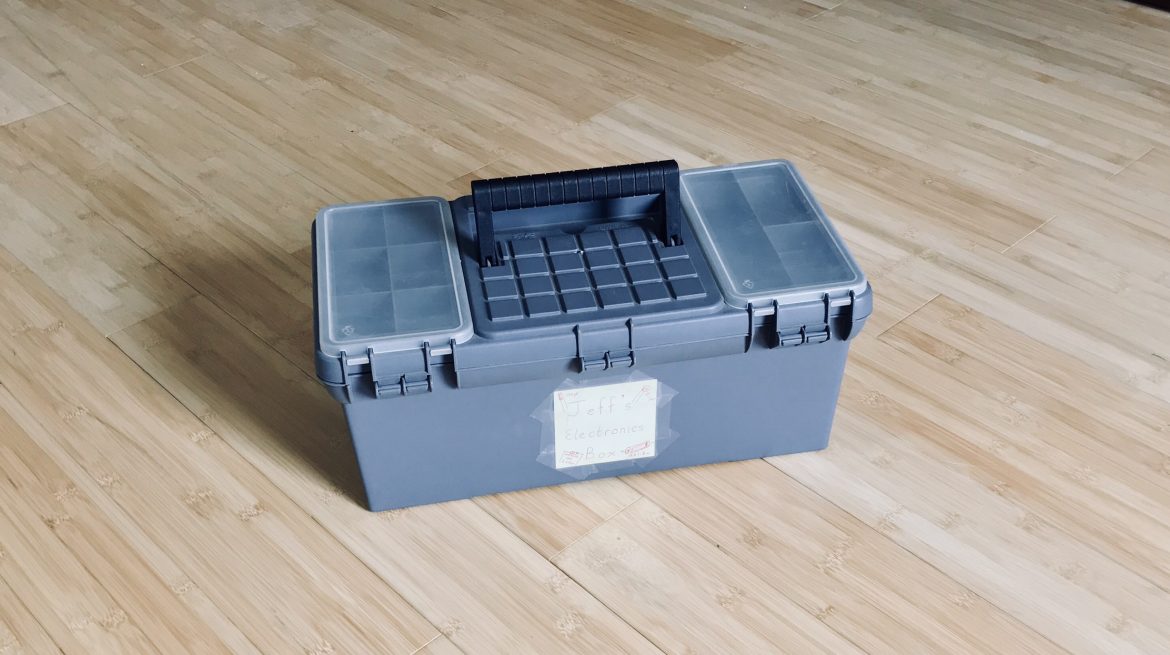 I spent much of this past weekend cleaning and re-organizing a rather daunting collection of stuff in my home office. This process revealed the small gray toolbox that my dad gave me when I was eight or nine years old. The back of the box has a taped-on yellow sticky note that says “Jeff’s Electronics Box” with four components in the corners: an electrolytic capacitor, a ceramic disc capacitor, a resistor with perfectly bent leads, and one AA battery. (This was long before I had any knowledge of or reason to work with surface-mount parts.) It occurred to me when I saw the sticky note that I have come full-circle through a pretty interesting career path.

I remember “electronics” being the first thing that I wanted to do as a hobby and, possibly, as a career. Of course, I had no idea what such a career would entail at the time. Heck, even if I had known what it was like then, the industry has evolved so rapidly that my mental picture would have been completely inaccurate by the time I actually entered the field.

Nevertheless, I remember clearly taking that toolbox full of wires and components and tools to a mid-week “career night” event at an AWANA club that I attended at the time. In fact, I believe that event necessitated the label. Otherwise, the plain toolbox would not have indicated anything significant about my potential career choice. I really wanted to paint the right picture to other attendees.

I developed my interest further between the ages of 10 and 12 building some excellent Graymark kits, including a fun programmable robot that was probably the most complicated kit I had done at the time. My dad got me the version of the kit that included the practice foam breadboard, which allowed you to build the entire circuit in a large-scale elevated form for easy troubleshooting. It was like a debug mode build for hardware, before the days of ubiquitous per-component breakout boards. The only trouble was that it required soldering everything once, then unsoldering or cutting long leads before re-soldering in the final PCB location. I had little interest in doing all of that extra work just to prove to myself that the circuit would behave as expected, and I think I opted to skip a lot of it.

My interest in electronics morphed into a desire to become an amateur radio operator around the time I turned 12, which surprised my parents because I have always been a very quiet person. To this day, I’m not sure why I chose to pick up a hobby that is literally built around communication, but I enjoyed myself and learned a great deal in the process. I let that fall by the wayside after a few years due to other interests.

My focus shifted more towards software design and network administration in my early teens, including some adventures with various Linux distributions (before you could get up and running in 10 minutes with the latest Ubuntu LiveCD) and building an 802.11b wireless network in our home to share our EarthLink DSL connection (before you could go to the nearest big-box retail store and buy a router). Ah, those were the days.

I earned my first tech-sector dollars in my mid-teens working for a friend on Goldmine database customizations, a gig that lasted about six months or so before we went our separate ways. A while after this, I slowly built up a personal tech support clientele through word-of-mouth. I even registered a sole proprietorship for myself locally as “JR Network Solutions” (constantly interpreted as “Jr.” instead, much to my chagrin). We got a second landline added to our house for my business number, although the only calls I ever got were solicitations. I still remember talking for an hour to a Verio rep trying to sell me web hosting at ridiculously high prices. (I didn’t sign up for anything.)

My software development career started in earnest after I built a non-trivial ASP-powered dynamic calendar script for a church website, and ended up on the radar of a couple of guys who owned an outsourced IT support company that also dabbled in web design for some of their clients, including the church. The calendar script impressed them enough that they asked if I wanted to do some more in-depth work for them on a project they had going on, and I happily agreed.

I spent a full nine years with that company, delaying my college education by one semester to get started. I continued through five years of classes, my wedding, and then moving across the country to Virginia. They provided a stable but flexible position, allowing me to work around my widely varying class schedules and then remotely from Virginia. My main project was an in-house business management system built in PHP and MySQL, but I also managed the server that project was hosted on, built a distributed asset monitoring system, integrated the management system with their accounting service, built a Windows application for easier scheduling, and even manned the phones for a short time.

In mid-2011, I started working on the Keyglove project in my spare time after discovering the wonderful world of Arduino. The concept of using simple C++ functions to make an inexpensive but flexible bit of hardware actually do something in the physical world excited me to no end, and it compelled me to begin my adventure back towards hardware. I had tried playing around with PIC16F84 microcontrollers about 10 years prior, but I never managed to achieve the entry-level “blink an LED” project with that platform. The programming interface hadn’t evolved to the level of simplicity that the Arduino provided in 2011.

The Keyglove project required a wireless interface to do what I needed, so I began exploring Bluetooth connectivity options. I tried one module from Broadcom that I literally desoldered from a cheap wireless keyboard and mounted onto a simple custom breakout board that I commissioned from Adam and Matthew over at Wayne and Layne. I managed to make it talk–just barely–but the module was otherwise opaque and ultimately not useful. After further investigation, I finally settled on the comprehensive WT12 module from Bluegiga. With some tips from Adam and Matthew and a shiny new CadSoft EAGLE installation, I churned out my own WT12 module breakout PCB design and had it fabricated by Laen over at OSH Park.

Thanks in no small part to the near plug-and-play experience that Bluegiga’s WT12 module provided, the board worked on the first try, and I was off and running. I wrote a host-side iWRAP firmware control library to work with the WT12 in order to assist with Keyglove integration, and then expanded my breakout line to include a few more of Bluegiga’s modules after many people asked for them. My yak-shaving design project began to grow into a real business.

I remained in my web design position throughout all of this Arduino experimentation and fledgling hardware design work. However, that changed in mid-2012 when Bluegiga offered me a position doing apps engineering for them. All of my efforts with their products put me on their radar, and they essentially wanted to pay me to do the same things I had done as a hobby. Not a bad deal! The semi-yearly trips to headquarters in Finland provided a fun bonus, too.

My tenure at Bluegiga lasted from 2012 to 2015, through their acquisition by Silicon Labs near the beginning of 2015. Going from a web design and network administration role for an IT company into an applications engineering role for a wireless module company entailed a pretty drastic adjustment for day-to-day activity. However, I enjoyed the challenges and learned an enormous amount by directly supporting customers. There’s nothing like a customer to highlight all of the unanticipated ways to use your product.

Answering customer support tickets day after day after week after month after year starts to get old after a while. Despite management’s efforts to let me work on other activities, the support volume wouldn’t allow it on a regular basis. I became more and more eager to get away from “whack-a-mole” ticket management, preferring a more programming-oriented position where I could work on one large project for an extended time.

Cypress Semiconductor offered me such a role as a principal firmware engineer in late 2015, and I accepted. I got to spend the next two years on a long-term software/firmware design project. I even got to define and build the whole thing from the ground up, which is a dream for many engineers. In addition to honing my coding ability, I learned about project management, in-depth test definitions, team code reviews, business auditing processes, and many things that are hard to put into words. I even got to write a detailed user guide for the project. (I blame my appreciation and proclivity for writing on my parents and high school English teacher.)

My time at Cypress allowed for strong growth in some important professional areas, and helped me recover my coding creativity after a bit of a dry spell doing customer support. I thoroughly enjoyed my years there, the work I did, and the team I got to work with. Like my Bluegiga/Silicon Labs stint, I was satisfied (or better!) and not looking for other opportunities. However, that didn’t stop other opportunities from showing up unbidden.

In October of this year, after two years at Cypress, I decided to make yet another transition when I received an offer from BioMech, a smaller, more local company innovating in the motion analytics space. My official role is now Director of Hardware Engineering, and I’m responsible for a few different designs so far. It’s not just the schematic and board designs, in fact, but also the firmware that powers them. My tasks challenge me in all of the most personally satisfying ways. The work is actually very similar to what I did with the Keyglove project for fun in my free time. I just have more of it to do.

I’m now back where I started, but with two decades of personal development and technological evolution on top of it. I get to “do electronics,” as eight-year-old me might have put it, and it usually feels like fun. I’m in a great spot and excited for what the next few years hold.

My dad gets much of the credit for exposing me early to the things that put me on this track. I can trace a pretty clear line back to those formative experiences, and I wouldn’t be in this spot without them. (Not that my mom was less influential, since she homeschooled my brothers and me through most of high school; while she didn’t focus on electronics, she did provide the educational framework for darn near everything I learned.)

Now I have two kids of my own, and I actively look for ways to let them explore new activities. At only six months old, Lucas is still a bit young for anything even remotely career-specific. But Julia, now almost three, enjoys playing with electronics components and jumper wires and solderless breadboards for fun. She even calls downstairs to Mommy that she’s “working on my project!” when we’re told that dinner is ready. Looks like I have to un-set that precedent.

Neither of my kids may choose anything remotely similar to what I did for my career, and that’s fine. Regardless, I hope that they will always feel enabled and encouraged to pursue the things that excite them.