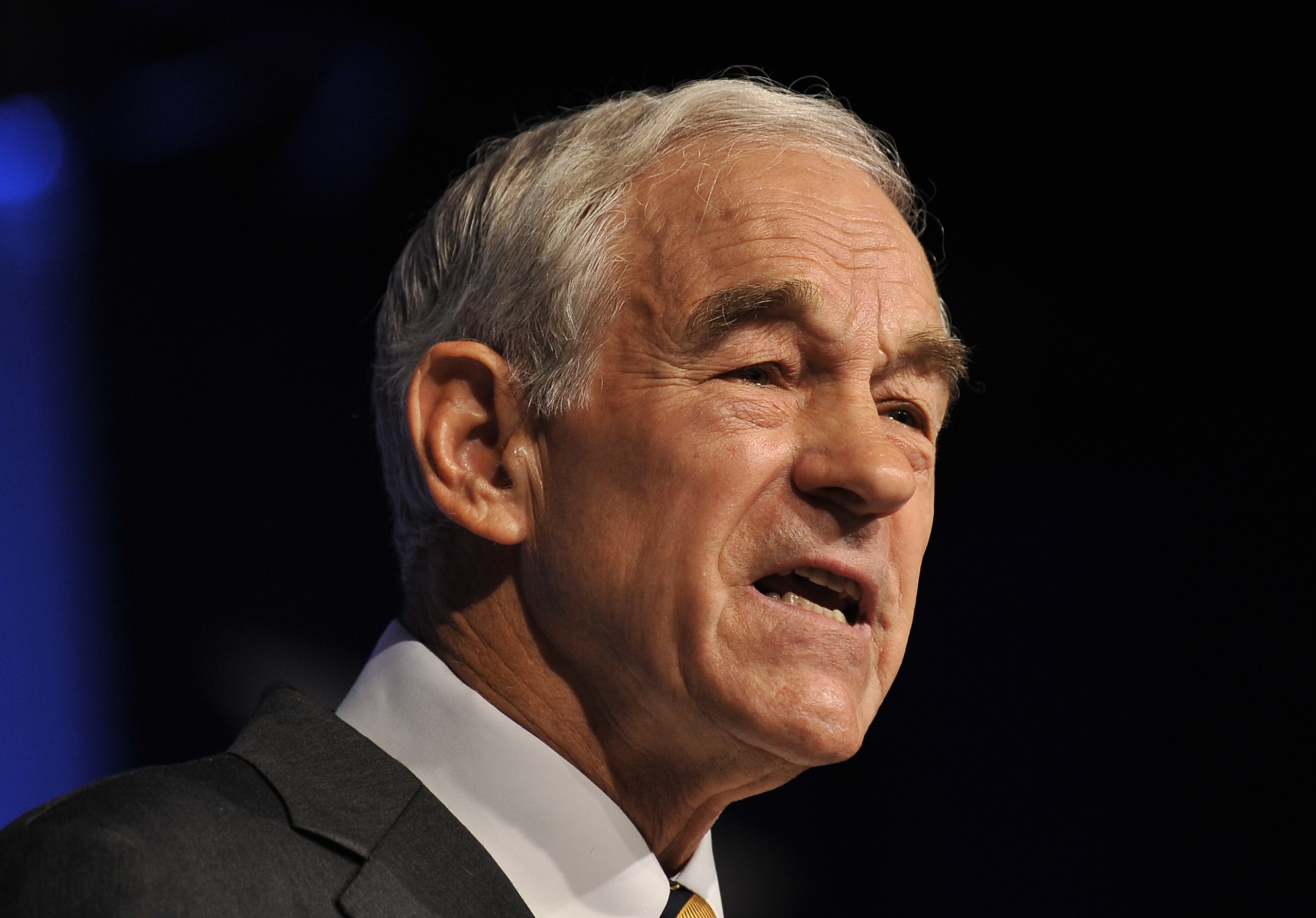 A Personal Endorsement for Ron Paul 2012

Please vote for Ron Paul in the upcoming primary election, and again in the general election in November.

Even if you have already decided who you want to vote for, even if you are predisposed to think Ron Paul is weird, ridiculous, or crazy, please take 20 minutes to read what I have written here to see if it makes you think. He is not just “the least bad option” among mostly poor choices, as we usually see every four years; Ron Paul is fundamentally and unequivocally different in very important ways.

Update 12/10/2011: William Stearns has provided some excellent additional resources in the Comments section. Be sure to check them out as well.

More detail is given for each of these points below, but here they are:

It will be exceedingly difficult to lay out a complete argument in an easily digestible form, but I will do my best to keep each point brief without sacrificing clarity, and simply provide links for you to read more on any particular topic if you would like more info. Watching or reading all of the additional linked material will likely take a couple of hours, but it is absolutely worthwhile if you are interested in more information. You may not agree with all of Ron Paul’s positions, but if you are willing to read through all of this, ask yourself how any other candidate stacks up against Ron Paul in the areas where the President actually has power to do anything. I can only see one truly beneficial choice.

We have some big problems to fix

I’ll start with something we probably all agree on: there is something wrong with this country. Regardless of why you think that is, or exactly what you think is wrong, there are problems to deal with, and they are not insignificant. Here are some of the most critical ones from my perspective:

Depending on your focus and how specific you want to be, I’m sure you can come up with many more to add to that list. None of these problems arose overnight, and they cannot by solved overnight either, but unless they are dealt with, this country will continue its downward spiral. Some analysts claim that the 2008 recession is over, that we’re on the road to recovery; however, I see no real reason to believe that’s true while we stay on the course we are on. We are far more likely to fall into an even deeper depression, because the government and Federal Reserve are both doing the same thing they did before and during the Great Depression, and it isn’t going to work any better this time around.

Ron Paul certainly gets the short end of the stick from most media outlets. It has been a tremendous uphill battle for him to get his views out to the general public, and he has only had some success recently due to a huge concerted effort from his rapidly growing individual support and the technological wizardry that is the internet. So, it is very likely that whatever opinion you have of him has been either entirely or primarily shaped by people who don’t like him, his opinions, or his supporters. I cannot pretend to be unbiased myself, but I will say that I have learned not to take anything at face value, and my own defense of Ron Paul here comes from a whole lot of research, debate, and critical thinking. Even so, I am willing (eager, even) to be challenged on any point, for the sake of learning and spreading the truth.

Please note that my reasons for supporting him have absolutely nothing at all to do with his party affiliation. Don’t let the fact that he’s trying for the Republican nomination preclude any further consideration; he is certainly not a “Republican” in the contemporary sense. That being said, here are my own reasons for believing that Ron Paul is hands-down the best candidate:

Every single one of these reasons does not apply to any of the other candidates. They most certainly don’t apply to either Romney or Gingrich. Ron Paul may not be the most physically appealing candidate or the smoothest talker, but the above 10 qualities make him vastly more “presidential” than anyone else running. He has every necessary qualification.

Most people who don’t approve of Ron Paul bring up at least one of these points, so it would be unfair to leave them out of this discussion. I will not address them at length here, but merely provide counterpoints and invite you to follow up with me, visit the supplied links, or look into his actual positions online. His statements and his record speak for themselves.

I would be happy to directly address any other specific objections, if you have them.

Why not any of the other candidates?

In short, because they can’t even begin to compare with Ron Paul and his record and integrity. There are definitely distinct reasons not to vote for the other candidates though. I did not compile these lists in this format, but they are the most concise, centralized collections of short points that I have seen anywhere.

With records like that, is there even a question who is most qualified? Bachmann and Santorum cannot possibly win the nomination at this stage, but they have their own sets of points as well (many of which are very similar to the ones above). Huntsman would be a better choice, but he is still nowhere near as committed to Constitutional government as Ron Paul is. Gary Johnson is pretty much completely sidelined, which is unfortunate because he and Ron Paul agree on most critical points. If you like Johnson though, you should really like Paul. Perry would be like Bush Part 2–not an encouraging thought. I can’t believe people would actually bring themselves to vote for Romney, and I can’t believe that so many conservatives are actually supporting Gingrich at this stage. Both of their records are atrocious.

Ron Paul is the only one who has real answers that are actually based in reality, not political maneuvering.

Well, that was long.

Yes, it was. Sorry about that. Thanks for reading though! Please feel free to reply directly to me for any reason. Here are a few online resources if you want to research for your self:

Update 12/10/2011: William Stearns has provided some excellent additional resources in the Comments section. Be sure to check them out as well.

Look into what I’ve written. Don’t just take it at face value. If you would like to, please feel free to share this with your friends. You can leave my name on it if you want, or you can send it as though you wrote it. I don’t care either way. My goal is simply to expose more people to this message, which they are unlikely to hear if they aren’t looking for it. This coming presidential election is likely one of the most important we’ll face, specifically because of the rapidly declining economy. We cannot sustain what we are doing for much longer; we need to change. Not Obama-style change, mind you. Real, specific, logical, effective change.

Please, please vote for Ron Paul in the primary election, and in the general election. If he wins the GOP nomination, there is absolutely no doubt that he will win the general election. Obama cannot compete with Ron Paul on any level–except possibly charisma, but people are becoming disillusioned with that. Contrary to what so many media outlets say, Ron Paul truly is electable. His support is substantial and growing.

Many states have open primaries, so that you can vote in them even if you are not registered as a Republican. (Visit http://www.bluerepublican.org for details about requirements and deadlines for each state.)

An invasion of armies can be resisted, but not an idea whose time has come.

The Economic Impossibility of Copyright in a Digital World

Why Michael Farris is Wrong about Ron Paul...

The Economic Impossibility of Copyright in a Digital...

A Conversational Treatise on the Problems with Intellectual...

I am not sure if my first comment got through or not so I am sending this one as well. These are some extra links and videos that may help further reinforce these points

Paul has written many books that explain his views and his reasoning behind them here:

The most important would be Revolution A Manifesto, I think, but End the Fed, Liberty Defined and the others are good as well.

http://www.youtube.com/watch?v=XL860DWdZgs&feature=related – Ron Paul interview on Univision, where he refuses to alter his position on immigration to pander to latino voters.

http://www.youtube.com/watch?v=A5nGCpzel6o&feature=related – In this Video Paul not only Predicts the Housing Bubble in 2001, he explains the mechanisms of how it will form (other predictions include: Iraq not having WMD in 2002, The fact that OBL was in Pakistan, Paul told us 4 years before he was finally killed, He also goes into a long list of predictions on the House floor in 2002, which are amazingly prescient)

These videos feature Michael Scheuer former head of the OBL unit in the CIA. The first discusses Paul in context of the current race, and the 2nd shows a montage of him taking on Foreign Policy presumptions Americans have that aren’t true.

On Abortion – http://www.youtube.com/watch?v=rpORBcZJF0I This video is from the Iowa Straw poll, Ron told a story from his own experiences as OBGYN, specifically witnessing an abortion as a Medical resident and why he is Pro-Life

http://www.youtube.com/watch?v=Wnj-5z9NJoY – This speech is from the Values Voter Summit, and he ties his political views to biblical principles.

Additionally, he calls Ludwig Von Mises his greatest inspiration. Ludwig Von Mises was an Austrian Jew who was forced to flee Austria due to the rise of Nazism. But they hated him not only for his race, but also because he wrote a comprehensive critique of Socialism and Fascism, denouncing the ‘Nazi’ economic program. A good book on Mises is this one
http://www.amazon.com/Mises-Liberalism-J%C3%B6rg-Guido-H%C3%BClsmann/dp/193355018X/ref=sr_1_1?ie=UTF8&qid=1323511739&sr=8-1
Note: Liberal here refers to the 19th century version (similar to Thomas Jefferson. Lockean ideas.)

This was just posted on reddit: Ron’s short book, Abortion and Liberty
http://files.meetup.com/504095/Ron%20Paul-Abortion%20and%20Liberty.pdf

[…] are taking time out of their day to voice their opinion, for example, check out this extensive personal endorsement of Ron Paul on SectorFej. OR, this USMC Veteran’s endorsement, or this excellent op-ed in Forbes on why Ron Paul […]